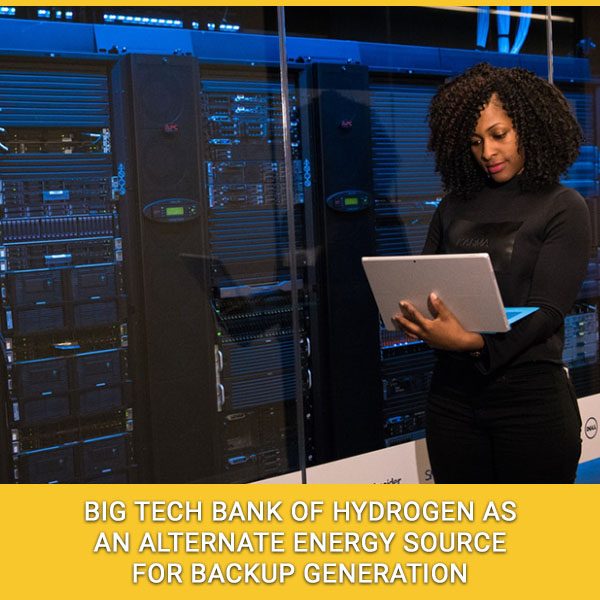 The catastrophic wildfires in recent years have been largely due to the aging infrastructure of California’s grid reliability issues. Due to this, both regulators and private companies have been stressing about having robust backup generation for their utilities.

Although diesel generators have been a common source of power in California, stakeholders are now looking for alternatives like hydrogen to replace diesel-powered generators. The search for alternate sources of energy has been more profound after the California Energy Commission workshop organized in January this year.

Silicon Valley Keeping An Eye on the Growing Demand

Most big commercial and industrial customers from California in the Silicon Valley are searching for alternative fuel options. Presently around 20GW of diesel generators are deployed by data centers across the world. With more companies taking the pledge for carbon-neutral initiatives, backup power from alternate sources such as hydrogen generators is slowly gaining popularity.

Last year in July, Microsoft MSFT -0.8% tested hydrogen fuel cells to provide backup power for its data centers. This move was a part of its commitment to become carbon negative by the year 2030. The company pledges to eliminate its dependency on diesel fuel by 2030. Although in the initial stages of using fuel cells as backup generators, the company is expecting to scale its 250 kW system to a massive 3 MW system. The targeted system will be equivalent to the diesel-powered generators that are currently deployed at the company’s data centers.

Earlier Google had announced its plans to test batteries for power backups. The primary reason for the increased popularity of hydrogen as an alternative fuel is its cost-effectiveness at longer durations. The cost of a data center running on a renewable source of energy i.e. hydrogen is expected to be around $119/MWh in comparison to $4000/MWh for batteries to provide 48 hours of backup power. This estimate is provided by Jack Brouwer after his research as a professor of mechanical and aerospace engineering at the University of California, Irvine.

Usage of hydrogen at data centers extends way beyond backup power. With more tech companies striving to meet their commitment towards carbon neutral and carbon negative emission goals through onsite power generation, green hydrogen is a great alternative. It can be used to store and offer load balancing services to the grid.

Stored green hydrogen created onsite using cheap renewable electricity can be used to power fuel cell vehicles to offer emissions-free onsite transportation. The efficiency and versatility of Hydrogen generators can prove to be a valuable asset for data centers as they have the capacity of decarbonizing in the coming years.

So, is Hydrogen the Future of Green Energy?

Although in its initial years of implementation, the future does pave way for companies to look at Hydrogen as a possible green fuel to power their infrastructure. Research has already indicated that it’s not only a powerful but cost-effective solution as well. Also, analysts believe it’s easier to store and use for a longer period.

Big tech companies are already investing millions to integrate this backup power generating system for their operations. After successful implementation in smaller-scale operations and deeper research being conducted to explore possibilities, the future does seem to be bright for hydrogen-powered generators.

You can consult our team for more information about such backup services. For the past 25 years, Mid Florida Diesel has excelled in offering sales and service of engines, generators, and switchgear. Our team is equipped to provide backup diesel generators installation and repair to both small and large corporations in and around Mid Florida & Florida State.